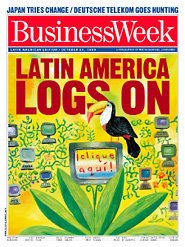 Until recently the formula for backing up Internet servers was simple: If the server was based in Silicon Valley, the backup went in some kind of safe bunker on the East Coast, far from earthquake territory. New York servers usually backed up in New Jersey or somewhere west.

This month's terrorist attack on the World Trade Center and Pentagon changed all that. Suddenly many of the secure Internet data centers in the United States aren't looking quite so secure anymore.

That is leading Internet service providers and companies that rely on the Web to look overseas for safe haven, and the country they are looking at, oddly enough, is Panama.

The narrow isthmus nation sits at the intersection of five major undersea fiber-optic networks, which pass from the United States, Central America and the Caribbean down to South America, and from Europe and Asia to the Americas. That nexus gives Panama some of the best fiber-optic-cable access and bandwidth in the world, enabling it to run systems as big as the New York Stock Exchange or Web sites as far away as Canada or Hong Kong.

"Why Panama? Because it's one of the most wired places in the world," says Nelson Bendeck, a representative of Sun Tone, an arm of Sun Microsystems that is installing $500,000 worth of new server equipment and software in Panama. "All of the fiber-optic backbones of the United States, Canada and Latin America cross Panama. If there's a problem inside the United States, the most obvious place to go outside is Panama."

The tiny tropical country's timing in entering the secure server business scarcely could be better. Last month Swiss-born businessman Nils Petterson launched Altec, Panama's first data center, in a former computer complex vacated by the U.S. military during the turnover of the Panama Canal in December 1999.

Before Sept. 11 he had five confirmed customers lined up. Last week, he said, he had 70 calls from U.S. businesses interested in switching their servers or backups to Panama. Many of the U.S. firms calling were affected by this month's attacks.

Petterson's server complex, aimed at competing with major Internet data centers in the United States and Europe, offers about 1,000 gigabytes of capacity, enough to run up to 10,000 independent servers and 600,000 Web sites, he says. Capacity is expected to expand up to 3,000 gigabytes.

With what Petterson calls "some of the best connectivity in the world," Altec plans to offer service at least 30 percent cheaper than its competitors. Running a server from Panama, the chief executive said, can cost as little as $250 or as much as $5,000 a month, depending on computer space used. Round-the-clock bilingual technical support--a benefit of years of U.S. influence in Spanish-speaking Panama--is included in the price.

Panama, the land link between North and South America, has a long history as a communications and transport center. As early as 1869, land cable lines linking New York with South America ran through Panama. Today it is one of a handful of small places--including Guam and Hawaii--that lie at major fiber-optic crossroads.

Panama's other advantage over some of its competitors, backers note, is that it lies at an unusually secure location. Altec's literature notes that the country is free from earthquakes, unlike competitors' server bunkers in Silicon Valley and Mexico. Panama has no hurricane problems, no active volcanoes and the new computer center, which sits nearly beside the Panama Canal, is reportedly above flood zone.

Better yet, Panama has not been a target for terrorist attacks, and the Altec complex, on the former Ft. Clayton U.S. military base, benefits from an already high level of security along the Panama Canal.

"It's a very secure place in the world. It has to be to allow commerce to pass on the canal," said Bendeck, whose company supplied initial hardware and software for the project to complement the fiber optic network Petterson spent much of the last 19 months connecting to the site.

No one expects Panama to take over the secure server business from the United States, which remains the world leader. Petterson hopes primarily to lure home Latin American Web sites housed in Europe and the United States. But after the attacks in New York and Washington, a safe haven outside the United States may be an increasingly attractive option for Web-reliant U.S. companies as well.